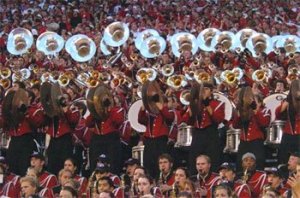 In a town full of half-baked rock bands, wannabe singers and all their hangers on, there’s one band that’s pretty solid year after year. For 104 years.

The UGA Redcoat Band is awesome. I purposefully try to get to that section every time I go to a football game just to interact. They’re funny (especially the drumline), spirited, and talented.

I’m writing about them today mainly because they really impressed me at the Vandy game with their performance. After doing some research, the directors found an original composition for UGA’s band from 1908! They updated it, arranged it, and played “The Red and Black March” to 92,000 people on Saturday. That’s impressive.

It’s unfortunate that people tend to ignore the Redcoats outside of football games because they, to quote a friend, “aren’t a real band.” LIKE HELL THEY AREN’T!

These guys have traveled all across the States and a few years back did a tour of China! They’re several hundred people perfectly coordinated in step and song. Let’s see Dark Meat try that!

So in honor of the oldest Athens band, here’s some videos of them performing some other Athenian songs.