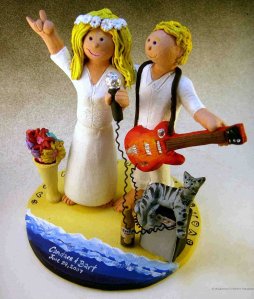 This weekend was my boss’s wedding so the celebrating and festivities went on all Saturday. There was a party before, the actual wedding, the reception, and then the party after the reception. Since I haven’t been working here all that long, I went to the after-reception party at the Melting Point.

Parties are kinda awkward for me. I don’t drink or smoke so I never have anything to do with my hands. I usually just shove ’em into my front pockets or find creative new ways of supporting my head at the table. Maybe the two elbow butterfly support, or the head angled slightly to the left…Add to that the whole “I know 7 out of 172 people here” factor and then you’ve really got me. Thank god for music.

The Melting Point was absolutely packed. I took a seat in the corner with another of my bosses (total of 7 from this company) and his girlfriend and a coworker. We discussed random things and had a great discussion about how our overall boss looks a lot like this guy from behind when he puts on a scarf.

Spring Tigers started up with a bunch of covers including “Catapult” and “Psycho Killer” which I am sad to say I only knew because of Rock Band 2. I like the band but I can’t help but feel they’d do a lot better if they turned the sound down a bit. You’re loud. Cool. But if I can hear is *bzzzzzzz* then that’s not a good thing. It ticked off this older lady so bad that she actually GOT ONSTAGE and asked the keyboardist to turn it down! PWND!

I wandered on back to the mixing board to speak with my friend Wes for a bit. I love watching him fiddle with the sound and you’d be amazed at what you can pick up while just watching. It’s a great seat to see everything from. It also opens you up to sneak attacks from random co-workers who send random rockstars to stand behind you until you notice them. Very creepy.

Next up came Heavy Petty, an amazing Tom Petty cover band. They played all the hits until my boss came onstage with pretty much every guy there and did the Super Bowl shuffle. I’m so glad they taped that…

Things were starting to wind down when Kevin asked if we were going anywhere later. I hadn’t planned on it but random rockstar insisted that we head to the 40 Watt to see Ice Cream Man (Van Halen) and Powerload (AC/DC). I found out that we had a lot of mutual friends in the band so why not?

We arrived in time to catch the last part of ICM doing some typical Van Halen guitar-type stuff. I was still a bit beat so I sat in the corner sipping on a Coke while a guy in a long curly blond wig wailed about sex and girls and teachers and all that jazz. A decent show. I just wish he would’ve done some sword twirling…

I chatted with the gang for a bit while we were waiting for Powerload. Any guy who takes on Bon Scott’s vocals with that much passion deserves a cookie. I’m not a big fan of AC/DC but there’s something to be said for watching Powerload with the carnival of people I was with. There was plenty of jumping and screaming and crowdsurfing from the stage. “Highway to Hell” was fantastic but “Dirty Deeds” was phenomenal. Hooray for three chord rock!

All in all, a very good night. Got back around 2, wrote this post, went to bed.