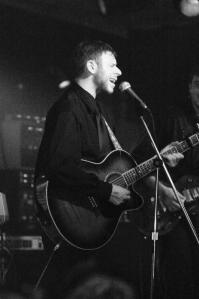 Matt, the lead singer, slipped me a disc during Music Business class and asked if I’d give it a listen. It’s not the first time a friend has asked me to try their stuff but it was one of the few times that I actually liked what I heard.

I gave it a few spins on WUOG during the show to find out if anyone would react to it. People started calling in saying how much they loved it. After going to the 40 Watt show the other night, it’s easy to see why.

Leading Edge has a pretty classic sound, akin to the Modern Skirts with a bit more edge (pardon the pun). “Sarah” is one of the best things I’ve heard from a new band in a long time. The songs on their EP are pretty catchy and stick in your head.

That said, they are a new band and have a bit more growing to do as songwriters and performers but that’s half the fun. Nobody should ever stop growing. These guys will only get better with time and I can’t wait to hear what they do next.