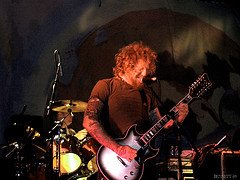 I’ve got to say, I’m normally not a big fan of corporate sponsorships, but if it results in something as awesome as the Scion metal event I just went to, bring ‘em on. Hosted at the good old Masquerade, the show was a metal showcase that stretched from 12 to 12.
I managed to catch Trash Talk, Skeletonwitch, A Storm of Light, Harvey Milk, High on Fire, Converge, Neurosis, AND Mastodon. I’ll do a little play by play to give you a taste of each of the bands.

Trash talk is a metal band that breaks many stereotypes: all the members are black (metal is kind of dominated by white folks for better or worse), their songs are really short (no 15 minute songs here), and full of anger (ok pretty typical, but my friend Nick managed to take a punch to the face by the main vocalist before they even started singing.)

Skeletonwitch was the best surprise of the showcase for me. Old school metal with the long hair and screaming about Satan is simply amazing. My favorite quote, “This song is about … Satan!” They are amazing check ‘em out. Seriously.

A Storm of Light is one of those bands trying to do a mix media approach with a dvd playing behind them. Normally I like the wavy metal field, but this one really didn’t do too much for me.

Harvey Milk an Athens band had a unique feel. The vocalist focuses less on words and has a haunting echo of a voice that seems to pierce you. Instrumentally, it’s very simple, and the songs seem to flow into one another. I’m still mixed about them quite honestly. I can’t decide if I like them or if I’m just biased towards Athens bands.

High on Fire, a band that many friends of mine love didn’t do enough for me. Perhaps they weren’t hard enough, but I left after 3 songs to go check out…

Converge a band out of Boston certainly has a large following, and I’m inclined to say they deserve it. Their recorded music sounds alright, but their shows are down right crazy. I counted no less than six people crowd surfing at one time. Screaming, “There is not God, only you” and getting a response of cheers is a pretty big feat in the South in my book. Never seen it done before, certainly not by from some guys from up north.

Neurosis was a solid wave metal band that was strangely very relaxing. While there was some thrashing about, the majority of the crowd was just bobbing there heads around, enjoying the trance.

Mastodon is well, Mastodon. If you didn’t already know, they’re a huge band out of Atlanta that is putting metal back on the map not by making compromises to the mainstream, but by wowing people with their ridiculously awesome sound. Remember Mars Volta before they went crazy back in the De-Loused days? That kind of ridiculous instrumentation accompanied by piercing vocals ranging from screams to crystal clear vocals is what Mastodon is all about. As much as I like to root for the little guy, Mastodon topped my list as the best show of the day.

Even with my 25db blocking earplugs, my ears still rang for a couple of hours afterwards. It was an amazing show and I thank all the metal gods (Scion, the head of this blog, etc.) for letting me have such an awesome experience.