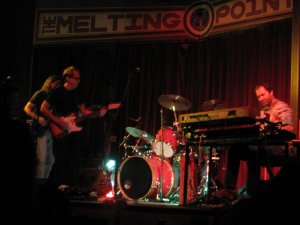 Some days, I really just have to toss my head back and laugh at the sheer ridiculousness that is my luck. Really, how many people can say they had a world famous record producer’s band play in their dining hall? I got to sit and eat amazing food and watch Strawberry Flats rock Bolton. I’m pretty sure about me and five others were the only ones who realized what was happening. Needless to say, we stayed the whole time.

I arrived just as the band was finishing up their first set. My friend Zach and I went over to talk to Mr. Keane for a second, explaining that we were in the Music Business program and really appreciated him coming to teach us ProTools. We also chatted about his epic win at Dancing with the Athens Stars. He blushed a bit and turned the conversation away from his dancing towards how much money they raised. He looked over as Scott Sanders (bass) sat down with a plate full of food and then excused himself to go take advantage of the all you can eat style that is Bolton.

Zach headed off downstairs while I stayed in listening range. I met a guy named Daniel and we decided to risk hearing loss and sit up close for the show. Turns out that we had both been to the Flats’ show at the Melting Point and had felt the same awkwardness that comes with being 20 years younger than anyone else there.

My “Cheeseburger in Paradise” was huge. Massive even. There was no way I’d ever be able to eat it all but I tried. It seemed oddly appropriate fare for a rock show. Regardless, the band clambered back onstage and I noted that their clothes were exactly the same ones as at the Melting Point. Gig wear. All black for Keane, a rather awesome tye-dye shirt for keyboarist Tim White, a neat relaxed ensemble complete with baseball cap for Sanders, and a t-shirt and jeans for drummer Deane Quinter.

The group launched into some incredible Santana grooves, sliding easily from one song to the next. Some Deep Purple thrown in here and there and a lot of other classic rock songs that I’ve heard before but really can’t place, my knowledge of that era being pretty pathetic. We watched the band play on as people just came in, ate, and left. We had made it a point to stay as long as we could and pay attention. Daniel and I only spoke during the breaks, after we had finished clapping. This caught the eyes of Quinter and White. After that, I found them often looking our way and smiling.

By this point, I’d finished a quarter of my burger. Delicious. The second set ended and Quinter practically leapt over his kit towards us. He shook our hands. “It’s nice to see someone actually paying attention.” Well, you’re welcome but it wasn’t that difficult. What constantly amazes me is the polish that they have. There’s not a sloppy note, missed vocal, or goofed beat. Or at least not that I could tell.

We took the opportunity to look around at the impressive decorations in Bolton. Every wall was covered in posters and records. The centerpieces were made of a vinyl record, a black box on it, a tape cassette glued to it (We had Stryper! HAHA) and a cd on top. Very elaborate for a dining hall event. The wall above the tray return was mostly Athens posters. B-52s and R.E.M., sure, but there was a NormalTown Flyers, a Brains (technically ATL…), and several Widespread Panic ones too. Nicely done. Strawberry Flats took the stage again as I made it halfway through my cheeseburger. It was a lost cause. Like looking for paradise. It’s too big to be found.

Anyway, they played some Clapton, which made me happy because I knew it, and two awesome songs called “Truck Driver” and “Walk the Dog.” Keane switched over to bass for a few songs as White picked up a cowbell for the last song. By now, most of the students had left and it was just us and the dining hall staff. The song ended, we clapped, and my cheeseburger remained on my plate. Well, a quarter of it anyhow. We chatted with the guys one last time and promised to come out to the Melting Point for the May gig. It was SO worth braving that pit that is Bolton for the music. We had a great time. I picked up my bag and started walking. I had another gig to go to: Dead Confederate at the 40 Watt.

A very interesting story came out of the last conversation we had with the band. The night Tyrone’s O.C. burned down, they had a keyboard/organ in there. It was left there for the next night’s act…Randall Bramblett. Small world eh?