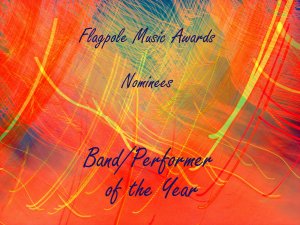 You might have noticed that the ballot for Band/Performer of the Year of the Flagpole Athens Music Awards is blank. Which means you have over 500 Athens bands to choose from to pick as the best. You’ve seen all the nominees for the other groups, you’ve got the power of the internet at your disposal, use it well. What follows is what goes through my head when picking artist of the year. The choice is yours.

1) Did the artist release an album?
If the band released an EP/LP in the past year, it seems to resonate more with me than a band that hasn’t. A shiny new piece of vinyl (or plastic or electrons as the case may be) shows that effort has been made to create something in the past year. Maybe the band just got the funds to release it or they rushed and got it out before a tour but a release always make me favor a band for a year end vote.

2) Did the artist tour heavily?
Say what you want but a band that tours only around Athens and makes no effort to venture even to Atlanta does not bode well in my eyes. Yes, not everyone can afford to jet off to NYC or Seattle but if you try, I’ll notice. Touring heavily often leads towards…

3) Band growth
I’m not talking member size or number of fans. I’m wondering if the band has a tangible difference between performances. If I saw you in February and then again in November and you spent all that time on the road, I’m expecting your band to be tighter, the songs a bit different. Did you grow as artists? Friends? Businessmen?

4) Band/Fan Relationships
Do I know you? Really. Do I know your name? Do you give me things like videos or special deals? Are your t-shirts cool? Do you talk to me after a show when I run up gushing like a fanboy at your awesomeness?

5) Are the shows EPIC?
Did you have a kick-ass show this year? Something that I saw and went WOAH. Did everyone sing or dance? THe lights, the sound. Was it something memorable?

So thanks for hanging out with us for 20 days straight. We’ll be covering Athfest pretty heavily in June, our blog’s birthday coming up, and cartoons(!?). Thanks so much to Flagpole, Athensmusic.net, Ziona Kocher, Sofia, and everyone for reading. Keep your eyes here for all things Athens music. We’ll rock your Ath off.