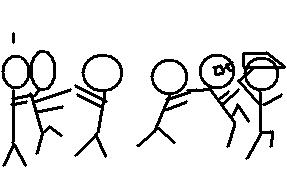 I slept late, feeling every single step that I took last night beating me down like the most vicious boxer. Little did I know that I would feel that exhaustion twofold by the end of this day. The late sleep-in led to me eating a bologna sandwich for lunch (which I’m sure you needed to know) and then hopping in the car at around 3 p.m. to head to downtown.

I met up with Tony and Rebecca and we walked around a little bit, discussing various plans for the weekend. The heat was being absolutely brutal so we headed into an icecream shop for smoothies and shakes. While I was waiting for their orders to get filled, I was pondering over my friend David’s plight. Poor guy works for a news organization yet they hadn’t even bothered to give him a press pass to the shows. I had given him a few names to check out and he eventually got them. And here was my shiny little pass. My very first, honest to god, media pass. So AMJ was finally recognized as an actual journalistic being. WOW.

After our shakes, we decided it might be best to invest in some sunscreen. I’m whiter than pale so the SPF 80 was looking really good to me. Ended up with some cheaper stuff. After a long, sad, and slow look at the remains of the Georgia Theatre, we had to split ways. I was due at a video shoot for WNEG. Me. On tv. Again with the wow.

I was so nervous about being on television. And LIVE no less. Where do I look, what if the questions are hard? Fortunately for me, Jeff Montgomery was posing the questions. Music guy for the win! The shoot was over before I realized it, leaving me free to soon go to the beginning of Athfest at the stage. I happened to run into Bruce who was on his way to shoot a segment for the same program. We chatted a little until his ever present Blackberry rang. I jetted off to the Main Stage, fingers crossed that the action hadn’t already started.

We were ambushed from behind by our ex-classmate Duckie who was off to the Morton Theatre for several shows there. Matt made his way to the parking deck and I headed off to see that live-wire Dexter Romweber. I had last seen that ball of fire at a WUOG sponsored event where I helped run sound. Dex has been traveling around with his sister, doing duo work and getting a lot of high praise.

I ran into a few of my photographer buddies, one of whom was being harassed a bit by a former band member of an old Athens band that shall remain nameless. It was a bit creepy. But he soon went away and I took up my usual post in the corner of the Watt and proceeded to watch Dexter and his sister rip the White Stripes a new one.

My schedule has planned out that we’d be headed over to see Caper and the Cookies. I didn’t make it. The friends all returned from the Skirts show and offered to walk me back to the car. We caught up with Matt, fresh from putting up his gear. He made a completely, just plain-wrong, joke and I had to threaten to kill him.

After their laughter died down, we continued walking to my car. Parted ways with Matt after a short, slightly threatening chat. The walk was really long and gave us all time to be as nerdy as we wanted. We all piled in and I cranked up “In Time.” And we sang. Truth be told, we had pretty great harmonies going on until we had to drop Tony and Rebecca off at their car.

I dropped Ziona off at her hotel and then made my way back to the apartment. I was having a hard time sleeping so I put on my custom “Sweetness Follows” playlist and drifted into sleep on the most comfortable couch on the planet. My boss found me sprawled that way the next morning.