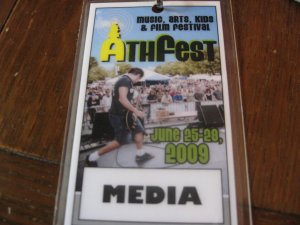 My first ever, honest to god, media pass. Shiny!

I woke up with my leg catacorner to the rest of my body and my earbuds threatening to strangle me. I had thought that Thursday/Friday night was bad. Oh ho ho was I ever wrong. The running back and forth all night had taken its toll on my body and mind. I had sworn that I would write some stuff up for Flagpole and this blog so I used the opportunity to sleep in and write. I also tried uploading some videos to the youtube page with varying stages of success.

I grabbed yet another bologna sandwich to tide me over until I could get out to downtown for another marathon run of bands. I really really wanted to see the Warm Fuzzies. They’re friends of the blog and I dig the bubbly pop that they do. And since they were playing the Hull Street stage, I would get to stand under the mister! SCORE!

When I finally had parked in the deck and waded my way downtown, Dancer Vs. Politician was finishing up on the Main Stage. It had been a while since I had heard them so I asked Matt at the AthensMusic.Net booth who the performers were. Got an answer from Matt and a bit of snark from Mr. Aubrey.

“I thought you were supposed to know all the bands in this town.”

The Murmurs gang came by baring gifts in the shape of cool little buttons. One “violent green” Athfest button (told you we were nerds) and one GA Theatre one. We felt a little like steamed broccoli under the mister but the music alone was worth it. Songs about Dairy Queen and robots? Sign me up.

A few delicate strains of AZAR came ringing out from the Main stage and we knew that Venice is Sinking had arrived. It was, I believe, Lucas’ birthday as well. I excused myself for a song to record from the pit. I ran into a lot of my bosses there and a few of my ex-profs as well. Venice is Sinking had a really good show going. By this point though, we were all sweating up a storm.

Next was a small performance from Liz Durrett at the Hull stage. We were sneaking into a corner when I saw Kris Langley from one of the bands that introduced me to Athens, Television Buzz. Turns out that the drummer, Brent Cash, has recorded a song for a Sonic the Hedgehog game. Very random, very cool. Kris’ adorable son Will was there too, waving and saying hi. They eventually vacated their seats to my friends and I sat on the concrete, enjoying the flowing music and the wafting breeze coming through.

We toyed with the idea of going to see the Ginger Envelope but heat exhaustion won out so we piled into Trapeze. We ordered water and tea and remained fairly puzzled when the waiter asked that we not request more ice.

“Our industrial size icemaker can’t keep up with the huge crowd.”

So, with our room temp tea in hand, we proceeded to do what all young nerds do when bored in public..take pictures of ourselves. Half of my memory card is now dedicated to my friends dodging my various attempts at photographing them. We managed to finally get out around the same time as the Corduroy Road got onstage. I was meeting with a lot of friends at that point. Sorry to the gang for being such a pain saying “Be right back.”

It was around this point that we headed back towards the Ice Cream Man. He waved and yelled “You’ve got to come see this!” So, after borrowing VIP passes from Steven and Daniel and tossing them horseshoe style around the gang’s heads, we went back to find Dawson perched ontop of a dumpster, looking rather pleased. Once we got to the front of the dumpster, we found that members of Dead Confederate and Manchester Orchestra were occupying said dumpster.

Wow, that’s random. But it was for the Ice Cream Man and I think we all had a lot of fun being all special and seeing that happen live. We hung back and chatted for a bit, watching Don Chambers set up in the near distance. The heat at this point was ridiculous. We were all absolutely drenched in sweat and sunscreen. It was decided unanimously that we should all go back to our respective places of residence and take showers before headed over to the Melting Point. After all, you never know who you’ll run into.

So I ran to my car and got back to the apartment in time to take a quick shower. I dressed up a bit and was in the middle of finding my shoes when all of a sudden I get a text message. Tony and Rebecca and Ziona are already at the Point. And they’ve already spotted someone squeal worthy. Random rockstars ahoy! I arrive soon afterwards and run in to talk to my buddies Wes and Kevin. “Welcome to soundcheck.” I can’t help but laugh.

Flash to Bang Time was great. I had heard a little of what they sounded like back at NEDfest but this was my first opportunity to actually get into what they were doing. Some of their friends and family were watching from afar while I, like the nut I am, was leaning up against a pole, trying to film the damn thing in the semi-darkness.

In between acts, I finally got to meet one of my twitter followers in person. She came up to me at the table and had noticed me filming. I guess that’s how she figured it out. That and me tweeting “OMG” from the Melting Point. Come to think of it, that was probably it. She expressed a bit of disappointment at my lack of actual blue shades. The sad truth was that they had been crushed at the R.E.M. concert last year when I was in the pit. I haven’t had a chance to get new ones yet. It was great to meet her (you know who you are!)

Love Tractor came up next. I had been warned by several people that this was not the original lineup and that it might be lacking some actual oomph. While I did enjoy the “Fun to Be Happy” portion, I really didn’t see much connection between the old Love Tractor and this new one. The music was good. Could’ve done without seeing the girlie parts flashed on a giant screen while eating my BBQ Pita thingies. Ick.

Then Five Eight. I love Five Eight. They had actually won me over at last year’s Athfest show which is now immortalized on every pass, promo, and paper dealing with Athfest 2009. We enjoyed what we saw and heard, took a lot of photos from the top section and then left to the parking lot.

We had decided to make gifts for each other. Since I am lacking in pretty much any creative skill, I went with special t-shirts from different listening parties. Rebecca had made a very cool sculpture of a wolf for me and Ziona, dear Ziona, had made fingerless gloves, a special button, and a little felted rabbit…wearing a Mike Mills nudie jacket. The thing is freakin adorable.

Needless to say, we didn’t make it back to Cine for The Buddy System like I had hoped. We were all just so drained. But this would prove to only be the beginning of our encounters with Athens Music history. I plopped down on the couch, mind racing, thankful that my guests had gotten to see some legendary people, and that we were only hours away from retracing some lost paths through Athens history. I looked up and the ceiling and smiled.