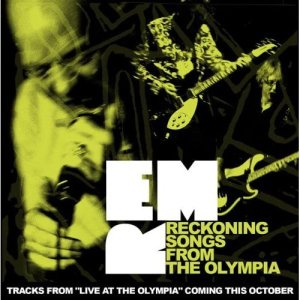 Yes, finally an R.E.M. review on AMJ. Though technically not a cd, this “sampler” pack of songs from the Dublin Rehearsal Sessions in 2007 gives fans a taste of what’s to come in October when “Live at the Olympia” comes out. What a coincidence that the remastered “Reckoning” just came out, right? How random…

As always, quick word about the artwork. If you take the recent 8-bit meets apocalyptic style of Accelerate, the bright singular colors of the Dublin Rehearsals and the twisting, old Appalachia drawings from Reckoning, you get the digital cover seen above. Nice, simple colors of black, white, and what the Murmurs gang has so eloquently described as “violent green.”

Since this is a live album, we’re gonna venture off our usual “here’s the song and how it sounds” review. With any luck, you’ve heard these songs many times before. If not, may I point you to the remastered version available here?

I wasn’t fortunate enough to attend the Rehearsals in 2007 (though my boss was and has made that annoyingly clear). But most fans have either heard the bootlegs or have seen the videos up on youtube, so why even bother putting out a live album? Well, I promise you, your bootleg sounds nothing like this. The guitars are jangling clear, drums (which are so hard to mix right) sound phenomenal, and the vocals are blended well. You hear a spatter of clapping and cheering at the end of the tracks, though I do wish you could hear a bit more of the crowd singing along.

It was a big treat to hear some of these older songs on the tour. Tunes that are 20+ years old fit seamlessly beside the new stuff. It’s almost as if they hadn’t aged a bit.

But let’s be honest. Stipe’s voice isn’t as young and clear as it once was. Decades of singing and smoking have changed it into an even deeper growl than before. So don’t expect to hear note for note renditions of the Reckoning songs. Instead, it’s an opportunity to observe how age and experience can change a band.

For instance, “Harborcoat.” Stipe’s lyrics are a bit clearer (though as cryptic as ever), Buck’s guitar is louder, and instead of having Bill Berry’s voice, you hear Mills and McCoi. For all the differences, it still has a fierce momentum and gorgeous harmonies. I just wish someone had taken Stipe’s harmonica away for that middle eight bit..

“Letter Never Sent” is an odd song to throw on here but again, you’re running back into some amazing harmonies, something that has been sorely missing in the post-Berry albums. Stipe forgets some lyrics but it’s not a show so it doesn’t matter right?

Some really interesting vocal interplay between Mills and Stipe on “Second Guessing.” Stipe’s maintained that you shouldn’t confuse the singer with the song but it’s interesting to think about where they were when it was originally written. There’s a bit of arrogance and naivety on “Reckoning” when a twenty-something Stipe sings “Why’re you trying to second guess me?” When it’s sung a few decades later by the man who’s been there and done that, it’s from a position of experience and a bit of exasperation. It’s kinda like he’s singing to himself…

Finally we come to “Pretty Persuasion,” described as “not really a family story.” If anyone ever doubted the drumming abilities of Bill Rieflin, this should blow them away. It’s hard enough to step into a song that’s been made a classic by another drummer but to put your own subtle spin on it, that’s talent. Probably my least favorite on the sampler but that’s just me.

So should you buy this? It really depends. If you’re curious about how the Dublin Sessions will sound, go for it. If you’re a hardcore R.E.M. fan, it’s nothing you don’t already own but it’s a bit more shiny than your bootleg. If you haven’t had the pleasure of seeing R.E.M. in concert, get it.

I’d give it an 8 out of 10. It’s a bit of a redundant thing for anyone who already owns a bootleg of the shows but a nice peek at what’s to come. I wish they’d do more small shows like this since it captures the energy between band and fan in a way that festivals and amphitheaters just can’t. I would’ve renamed it something like “R.E.M. Dublin: This is Not a Show.” but oh well. Minor complaints really. This would make a nice intro to R.E.M. for your friends though. This is not a record. And this was not a review.