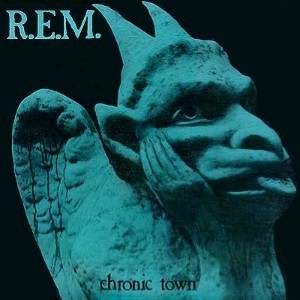 It’s been 27 years since it came out but R.E.M.’s “Chronic Town” EP still sounds as timeless as ever. It’s a howling, haunting, hell of a debut for a band. I came to the EP as many others my age have, through the collection Dead Letter Office. On cd. I finally emptied my pockets for the vinyl version last year only to find my record needle in a broken condition. Regardless of the way I hear it, “Wolves, Lower” is probably my favorite early R.E.M. song.

What was it about this little EP that caught on? It was so vastly different than anything else on the radio, so much so that it originally could only find a home on GA radio stations and college stations like our own WUOG. Grab some punky art-school tastes, throw in a melodic bass, thundering drums, and a guitarist in love with the Byrds and here you are. It shouldn’t have worked. But it did.

It also established many R.E.M. traditions early on. “Chronic Town” reviews sited the lyrics as “mumbled” and Stipe was labeled “mysterious,” Buck’s guitar became “jangly” and so on. It also started the fun tradition of renaming sides. Instead of the “A” side, you have “Chronic Town” and the B side is “Poster Torn.” The back side of the album originally listed the songs in the wrong order. Not quite the mystifying numbering on albums that we’d see later, but still something that just seems REMish anyway.

What’s truly amazing is how well the songs have held up. When the new Dublin Rehearsal discs come out, take a listen to the “Chronic” songs alongside the new “Accelerate” stuff.

When all is said and done, “Chronic Town” is an incredibly Athenian album. For me at least, a chronic town is one where everything is always the same but always in flux. Here we have students always coming and going from UGA but it’s always been that way. Bands come, bands go, and the same goes for venues. You pass by the kiosks downtown and there’s tons of posters, taped and torn. Trains run through campus, boxcars covered in graffitti. Sure, we’re now nearly three decades removed but what’s really changed? When past meets present, it points towards the future.