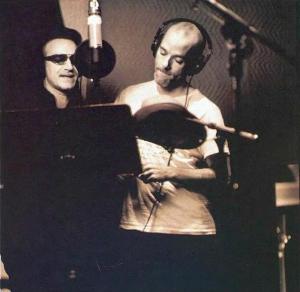 My thoughts the past few days have been occupied by a certain sunglassed frontman, his skull-cap wearing guitarist, their hot as hell drummer, and their classy bassist. U2 hits Atlanta tonight, marking almost four years since I last (and first!) saw the band live. It was the night before my birthday and the tickets were my gift. I’ll never forget it. Funnily enough, in the crowd were two people that I had no clue would enter my life soon: Mike Mills and Michael Stipe.

Oh yes, U2 remains my favorite band right alongside R.E.M. and Pylon. If it weren’t for the former, I’d never have known the latter. U2’s album “All That You Can’t Leave Behind” drew me out of a serious depression in my teens, brought me to a place where music could do anything. Over the next few years, I’d devour every album, study every line, read every book, and join the @U2 community. They even provided my longest held nickname: Blueshades. I had a great pair of blue wrap around sunglasses that rarely left my face, when they did, my blue eyes took over.

It was 2006 when I was surfing along @U2 when I found a subforum on R.E.M. The discussion centered on a project called “Automatic Baby,” a one time event where Stipe and Mills (who’d just released Automatic for the People) collaborated with Adam Clayton and Larry Mullen, Jr. (who’d just released Achtung, Baby!). They performed the song “One” at a party for new President Bill Clinton. The two bands were at the peaks of their careers, following two separate paths that ended up bringing them together so many times.

Articles trying to pit U2 versus R.E.M. are misguided at best. It’s like comparing apples to oranges, both are fruit and your taste determines which you prefer. The two bands are brother bands, two sides of the same coin. Both have been inducted into the Rock and Roll Hall of Fame now and are still active 29+ years since they began. Must be doing something right.

The similarities begin early. Both Murmur and Boy were stunning debuts, with Murmur over taking U2’s third album War as Rolling Stone’s album of the year. Both had okay sophomore albums and the next few albums showed a continued growth for them. Funnily enough, in 1987, R.E.M. released the hard hitting Document just as U2 released Joshua Tree. Then in ’91, came Out of Time and Achtung, Baby!, high points for both bands.

Personal tastes aside, U2 and R.E.M. hit career bumps in ’97 with the odd and disjointed Pop doing U2 no favors and Bill Berry leaving R.E.M. who soon released Up in 1998. The album spectrum crossed again in 2004 with mediocre How to Dismantle an Atomic Bomb and the still cringe-worthy Around the Sun. Thankfully, both rebounded with No Line on the Horizon and Accelerate.

But in addition to any musical or thematically related areas, the friendships between members of the bands has continued to thrive ever since that first meeting in the early ’80s. Stipe has consistently cited his relationship with Bono as one of his most important, especially when coping with the trappings of fame and artistry. Buck owes Bono his allegiance too after the U2 singer testified as a character witness during his trial. Bono and co. appeared in Dublin for the Accelerate test runs, throwing remarks from the crowd.

U2 set out to conquer the world, become the next Beatles. R.E.M. turned out to be the fathers of the alternative/indie movement. They remained friends and continue to churn out great music and incredible live shows. I could write a book about it, maybe one day I will. It’d involve actually meeting them all, a lifetime goal, but maybe one I could obtain.

So while I’m watching U2 tonight, I’ll secretly be hoping for a reunion of “Automatic Baby” (or Accelerate Horizon). Not just because it would sound amazing, but because there’s a spark between friends that nothing can replace.