I was flipping through my box of memories the other day when I came across a slightly yellowed ticket stub wedged between an old program and an usher badge. I couldn’t believe the date. Two years ago. No way. Yet there it was, serving as a little reminder of one epic October spent bouncing between Pylon and R.E.M. events all over town.

I was a knock-kneed, snot-nosed kid. I remember driving around and around the Varsity parking lot, wondering if it was okay to park there instead of across the street. I’d bought my ticket to this strange event nearly three weeks before and was still on an R.E.M. high from my first release party at Cine on the 15th. I was in love with the song “Ascent of Man,” obviously never having heard the Around the Sun version. I Mapquested the way to Seney-Stovall Chapel, knowing full well that it served as the band’s backdrop in Athens, GA: Inside Out. What I didn’t know was that it would also play a huge part in the Accelerate recordings. But I digress.

I arrived obscenely early. “R.E.M. in Perspective: An Athens History” didn’t begin until 2 p.m. I was there at 1:15, a little nervous about being there alone, my roommate having already humored me with the R.E.M. Live screening the week before. That was pushing the limits of her tolerance. Dragging her to an uber-nerdfest like this, well, I valued her friendship enough that I could spend one afternoon alone. Turned out to be a good thing.

I walked across the street to the Chapel, enjoying the cool air and quiet Sunday sunlight. There was an older lady out front, walking here and there, trying to get everything set up for the event. Most notably, a very large, very annoying table.

She just smiled and nodded. We managed to wrangle the damn thing into place after a few minutes of forcibly pounding its joints.Why they make those things so hard to put up, I’ll never know. Another few ladies showed up with some tablecloths and programs. Soon enough, the front lawn was completely set up and it looked really good. Since the entire event was the handiwork of the Athens Historical Society, their logo was on everything. Little pamphlets about the society, a FAQ, membership stuff… I began flipping through some of the material. It reminded me of my own hometown’s society.

As I’m becoming engrossed in the details of Athens during the Civil War, I feel a tap on my shoulder.

“Would you like to be an usher?” asked the sweet lady from before. She needn’t have asked. I was on it.

The guests started arriving and it was my job to corral them into a few rooms in the back. It was such an odd thing, meeting all these people I’ve only read about in R.E.M. books. There was Jared Bailey and Paul Butchart chatting up Maureen McLaughlin while Kathleen O’Brien Layson wandered around outside. Thankfully, John Keane stayed relatively stable but catching up to Tony Fletcher was another thing. One minute he’s talking to Gwen O’Looney, the next he’s out the door.

The line to get inside had grown by leaps and bounds by the time I managed to get everyone in a single room. R.E.M. fans tend to be an interesting mix of people and today’s crowd was no exception. There were people from all over the States (and a few from out of the country too). There were a few people sporting R.E.M. Live shirts like me. They all lined up and took their seats and we were ready to begin.

Fletcher kicked off the event with a very nice speech. “They always said there’s something in the water in Athens,” he mused. “Well, if we can find any.” Ha! Drought humor!

My friend from before had saved me a seat up front and off to the side, right between the mayor and an older gentleman whose name I don’t remember but to whom I am incredibly indebted. Every time there was a lull between panels or speakers, he’d lean over and whisper something about the band. He was invaluable to have next to you while watching the footage of young R.E.M. at Wuxtry and 688.

Now, I’ve used the word “scruffy” to describe the young band quite a few times but it was never more appropriate than this. It was like watching my friends attempt a few songs. The gentleman next to me chuckled. “They’re about your age there.”

The 688 footage was just a few months later than the Wuxtry stuff but what a difference some practice made. A few people noted that Berry’s drumming style had changed from the first video. More rock and less marching band. It was just mindboggling. 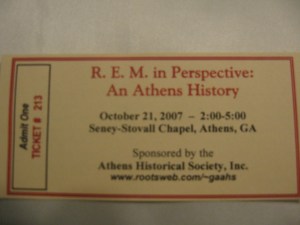 The music oriented panel was something to see. The last minute addition of K.O. proved to be the turning point as conversation tended to drift towards the earliest days of the band. We all listened intently as each speaker described life in Athens in the early 80s. Truth be told, more than a few of us were just as interested by the thought of rent being $50 as we were by the tales of parties long gone by.

The program says there was a slideshow and I’m sure there was but I honestly don’t remember it.

The “Social, Civic, Political, Preservation and Economic Impact” panel was by far the most informative. This was not the stuff you’ve read in the books. No, these were the stories about how R.E.M. helped save some historic parts of town. Or how the band donates an obscene amount of money to charity “anonymously.” Milton Leathers had quite a few stories but the best belonged to Gwen O’Looney and the time that she went on the Michael Stipe diet. Very, ahem, interesting results…

The whole thing ended with some great footage from the Vote for Change tour. There were a lot of great moments from backstage captured, including one where Stipe handed Springsteen the brand new Around the Sun boxset. You could hear Buck and Mills through the wall, learning how to play “Born to Run.” Sure, we lost that election but we should get props for having the best soundtrack.

The show was over and done. I stuck around for a bit to help get everything packed back up and to thank the ladies from the AHS for letting me pretend to be an usher for the day. I got in the car and drove back home, name tag still wrapped around my neck. What a day. The roommates were gone so I put Live in the DVD player and was found the next morning asleep on the couch, program draped over my eyes, ticket stub in pocket, and a smile on my face.

It’s so odd to think that all of it happened just two years ago. May as well have been a lifetime. A lot of those panelists are my friends now. The Historical Society celebrates 50 years next month. R.E.M.’s got the 2 year old footage and recordings from “Live at Olympia” coming out next week… Wild.