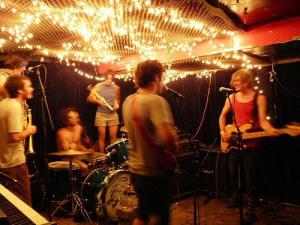 Trying to map out a family tree of the artists of Orange Twin records is like making a really thick wreath. The community is so grown together that it’s very rare to find a track that doesn’t have some random combination of E6ers/OTers. But for Nana Grizol, it works. In fact, the community ties and friendships between the bands are what is most important.

Nana Grizol’s first album, Love It Love It, was mainly the brainchild of frontman Theo Hilton. Hilton admits that the majority of the songs were about him missing his close friends, many of whom are also in bands. With all of them scattered across the globe, Hilton began writing about his personal experiences. The result is a twee leaning project, filled with clever lines and original music bolstered by a nebulous OT group.

The collaborations then to happen very organically, Hilton maintains. On the upcoming album, the lineup has settled a bit more and resembles an actual band. With a final six lineup, Nana Grizol’s members began contributing more to the songwriting process, changing the way some of the songs feel and move. Hilton mentioned the inclusion of a lot of horn sections, a sort of tribute to Otis Redding and other acts of that nature.

It truly is all about the soul of the community for Theo though. The connections between people are what drew him into his current lifestyle, working on some environmental issues and playing music with his close friends. There’s an underlying energy in Hilton’s voice as he describes getting into playing music.

“Ever since I was a kid, my friends were a huge part of my life. You start to realize your support network is all people that you meet. I remember I was 18, I went to a show, “This Bike is a Pipe Bomb”, all these people know each other and are having fun. I’m getting really stoked because you see people having concern for each other. Since then and through touring, I’ve met people who are just trying to have a positive impact on people they live with. And we get a sense of joy and fulfillment for doing cool stuff for people.”

The next album, Ruth, is set to drop in January 2010. Until then, Nana Grizol will be touring around the East Coast, returning to Athens in early December. I promise that they’ll make a lot of lifelong friends along the way. Cause that’s what it’s all about.
Nana Grizol will be playing at the Go Bar TONIGHT along with Emily Armond.