A full review of Live at the Olympia and This is Not a Show will be up after I get my copy. Thanks.

On an otherwise uneventful Monday night, I made my way downtown to meet up with my friend Cathy for a quick dinner before heading towards the shiny new Hotel Indigo for the Live at the Olympia Listening Party/Auction/Fundraiser. We were both incredibly excited about the event, throwing ideas to each other over the mildly warm Taco Stand enchilada and chips. She hadn’t seen some of the R.E.M. crew in years. I hadn’t seen some of them at all. We made quite a pair, walking out of the Stand with our fortune cookies crumbled and fortunes read. Nothing is more difficult, and therefore more precious, than to be able to decide…

The Rialto Room, home of the night’s festivities, is an upscale listening venue complete with huge comfy couches, tons of video screens, a little circular theater for close listening, and very intimidatingly dark bathrooms. After a long trip down the hallway to get our wristbands for the evening, we entered into a rotunda area filled with items for the silent auction. I was proud to see our little WUOG swag bag (which did get a few bids) but that darn tea platter was there again. Every single auction there’s an awesome tea tray and every single time my bid of $20 comes waaaaaay short. Thankfully, it sold for well over its value, benefiting Community Connection.

By a crazy random happenstance, we ran into J.R. and Vanessa Briscoe Hay. Incredible luck on my behalf, normal day for Cathy I suppose. We discussed the finer points of Leonard Cohen and made our way into the luxurious listening area to look at the wares for the live auction. A few signed posters, a nice stay at the presidential suite, and, oh wow, a signed Rickenbacker 360 in Jetglo. Somewhere on Facebook there is a picture of me looking longingly at it. Vanessa, her pianist friend (name escapes me at 2 am..), Cathy, and I took our seats near the stage, in front of a giant screen. There was still plenty of chatter going on in the outer room but we were settled in place, auction cards in hand. Vanessa had picked up the “Drive” card while Cathy went with my personal fave, “Wolves, Lower.”

In came Dan Matthews with an incredible gift for me. The third ever issue of Tasty World Magazine, which oddly enough featured record reviews by Michael Lachowski and an interview of Fred Schnider by Vanessa herself! I’ll make sure to scan it later but at that point I was in awe of this grouping of paper and ink that outdates me by a few years. You could hear the echoes of Olympia in the room during the down time, ears picking up forgotten phrases or embracing harmonies that only this record could provide.

Soon enough, our buddy Jeff Montgomery took to the stage to start drawing tickets for the raffle. And soon enough, our little group realized that our chances of winning anything this night were nil. But all was well because we were interested in seeing the live auction. If you’ve never been to one, they’re adrenaline inducing. Even if you don’t bid, you’re sitting in your seat, willing the bidders to go higher and higher. Hey, it’s all for charity. The posters went for a few hundred as did the prints and LPs. The suite went for somewhere in the $1,000 range after a chef threw in dinner for twelve. I hope I know whoever throws that party.

Then came that blessed guitar. Bidding began slowly. A thousand. A thousand fifty. Eleven hundred….Finally, Bertis Downs took the mic in an effort to get bids higher. After confirming with Dewitt that this was pretty much a one time only deal, Mr. Downs threw in his own bid for the guitar at $2,500. After that, things escalated quickly. Two blinks of an eye and the bid was at $9,000. Our group at the table just looked at each other, pondering how we could ever possibly afford such a thing. Yeah. Right. Our heads spun from the front of the room and Jeff to the back where unseen bidders placed an eventual $11,000 on the guitar. (I’ll have to check with Jeff again for the total tally tomorrow). Wow. 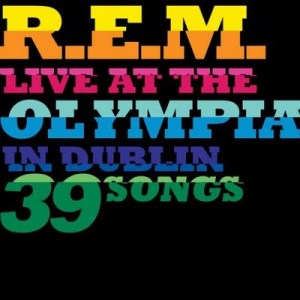 After yet another fruitful effort to win the raffle, we gave it up to fate, counted our good fortune for even being there, and took a bathroom break. I ran out and got the traditional listening party t-shirt while I could. Vanessa brought back some popcorn and we all settled in to watch the “This is Not a Show” dvd. Filmed by Vincent Moon over 5 days in Dublin, it’s not your average concert film. And anyone with motion sickness should probably just pop in “Perfect Square” instead.

Now I’ll save my views on the movie until I get to watch it on my laptop again (and get my vinyl for a final review) but I’ll go ahead and say that if you’re a major Stipe fan, this is your flick. As Vanessa pointed out, Stipe used to do a lot of work with Super 8 film. The Olympia footage mimics a lot of that, complete with sudden cuts and blinding contrasts. If you’re expecting a lot of Buck, Mills, McCaughey or Rieflin, well, they’re heard far more than seen. But wow, what sound. I’ve got to mention the incredible audio editing on the film. Songs blend seamlessly into one another.

I often looked over at my companions during the movie. Cathy was mouthing the words to “Gardening” or Vanessa was just cooing over a brilliant shot or verse. Vanessa actually missed the part in the film where Stipe recounts a bit of advice she gave him. We were laughing and squealing about it and she just had a very confused look on her face. Once we explained it though, she was laughing along with us. But when “Until the Day is Done” hit, we all went into this trance-like state. The same goes for “On the Fly.” I can completely understand why it was left off the tense and fast Accelerate but as Ort as my witness that song is far too beautiful to leave sitting for long. Here’s hoping for an official official release.

With much popcorn ingested (and thrown at each other), our little band of merrymakers headed out to the patio where Olympia was being played over the loudspeakers. My friend Sam O’Day was working upstairs so we got to say hi and I secured a ride back to my car. We passed by Mr. Downs with his ever present cap, finishing up some work on his laptop. There were a few “thank yous,” some well wishes, and a couple of “see this on the blog tomorrows.” Which may explain why I’m still up at 2 a.m. writing…

My night ended with a long conversation by the fountain about destiny and hard work. A lot of talk about Widespread Panic and giant pylons, concerts I never got to attend and 50th birthday parties, a lot of advice and a bit of blushing. Every once in a while we would all stop at the same time to hear a bit of Olympia. And I’ll promise you that if you ask me, years from now, what I think of when I hear “Cuyahoga,” I’ll sit back and smile and tell you about a beautiful fall night spent with dear friends by a waterfall, looking at the trees and the light that danced around us all.