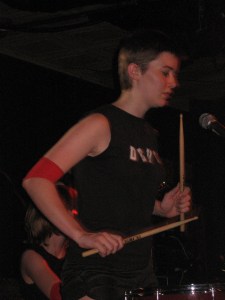 You should’ve been at the Underneath the Covers show. Devo was AWESOME.

Remember, if you want the most up to date news from Athens, Georgia’s music scene, follow Blueshades on Twitter or become a Fan of AthensMusicJunkie on Facebook.

Pylon revealed a long-lost video for “Beep.” Quite a trip back in time. Join the band as they go a’wandering through the country, rocking the faces off unsuspecting music fans.

Allison Weiss: The Tofu Baby of the Athens Music Scene. Love her or hate her, she’s getting attention, especially over at AthensMusicExpress.

Don Chambers Goes Back to School:
To be lucky enough to eat lunch while Chambers sings Christmas carols. Darn kids! See more pics and other great stuff at AthensRockShow.com.

Merry Effin Christmas:
Beyond Failure has a digital download of Flagpole’s Christmas Tape. If you don’t download anything else, get Chesnutt’s Dracular take on White Christmas.

Speaking of Flagpole:
After wading through a boatload of audio files, I found a very awesome Sound of the City guest spots from this semester. Flagpole/Caledonia’s very own GORDON LAMB hosted a show in October and man, what a show it was!

NEW Video on AMJ Youtube:
After fiddling around with my Flip camera, I finally fixed it for good. Now playing on AMJYT, Vic Chesnutt, Creepy, and Abandon the Earth Mission. Also have a TON of footage from this year from Normaltown Flyers, Time Toy, Oh-Ok, Dreams So Real, Dead Confederate, Supercluster, too many R.E.M. guest appearances to count and so much more. Here’s a sampling for ya.