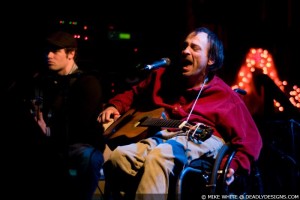 Legendary Athens songwriter Vic Chesnutt is in a coma according to reports stemming from Kristen Hersh’s forum. The songwriter had apparently taken a large number of muscle relaxants about two days ago but wasn’t found until 12 hours later.

There is some concern about brain damage that may have occurred due to the extensive amount of time the drugs were in his system. For now, Chesnutt remains in a deep coma.

I’ll update this story as I get more info. For now, all our thoughts and prayers are with our friend Vic.
—————UPDATES 4:05 PM———————-
Still no word on where Chesnutt was at the time, working on that now. I’m not printing anything til I’ve confirmed, so check for rumors elsewhere.

The AJC has picked up the news and features a short blurb from Chesnutt’s record label. New York Times is on it now too.

Look, I apologize for the earlier post that had reported Vic’s death. At the time, I had 4 completely reliable sources saying that he had indeed passed on. As the night went on, we had 4 other completely and utterly reliable sources say that Vic was still alive. I took down the RIP post because though I was sure at the time, I now have my doubts. Either he’s still in a deep coma or he’s gone. I’m trying my damnedest right now to find out what the fuck is going on because I’m just as pissed as you are. I apologize for the confusion on my end, I’m just trying to find out what happened to my friend and I can’t grab a straight answer.

UPDATE 12/15—————–
Ok, so I’ve decided to post my sources continuously now. Again, sorry for all this shit. You’ll have everything I do via Twitter so we’ll figure this out together, gang.

FROM FLAGPOLE’s TWITTER: Spoke with a friend who was at the hospital this morning. Vic Chesnutt is still with us although he is on life support.

FROM ATHENS BLUR, a retraction. Now to get some dye for those gray hairs they gave me.