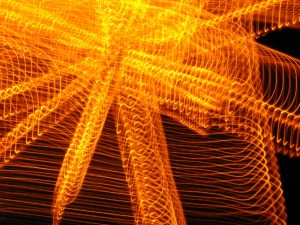 I drove out of town listening to a compilation album a reader had sent me last year. It was the perfect driving record for the two hour plus drive to Athens. There’s a lot of little towns to pass through on the way to the main highway then long stretches of absolutely nothing but road and pathetic attempts at roadside forests. The music was calm, mostly some Liz Durrett and a few Vic tracks, a random Venice is Sinking cut that I’ve never heard and so on.

Early afternoon on the highway was beautiful with the light dancing between the trees, holding an almost autumnal golden glow. I had gotten a new pair of blue sunglasses for Christmas and decided to try them out, instantly turning the world around me into a very odd colored place. The road was oddly clear for such a day as New Year’s Eve. It was a mostly uneventful ride through the other small towns like Bishop and I arrived in Athens sleepy, hungry, a bit dirty, and ready to hear some Supercluster.

Showered, dressed, and put on some B-52s to get me pumped up for the new year. Not like I needed that much encouragement. I honestly couldn’t wait until 2009 officially ended, taking with it all the general mess it caused. Cathy called and said “Let’s eat!” So off to Clocked we went.

Cathy spent much of the time telling me about her adventures at the Widespread Panic concert the night before. The boys had worn all black and played several of Vic’s songs in tribute. It was quite a star-studded event I suppose because some of our favorite people showed up: John Keane on pedal steel, Mike Mills dropped by for Rockville and Excitable Boy, and Randall Bramblett’s sax blowing everyone away. I’d been listening to a live stream of the show but that doesn’t compare at all to actually being there.

Our hamburgers duly devoured, we tromped off towards Wuxtry for some wishful thinking shopping and a chat with some friends. It was freezing outside and very few people were on the street. Very strange. I haven’t had the pleasure of spending a lot of time in Athens while the students are away. It’s quiet. Well, as quiet as it’ll get on New Years…

There was something inspiring about the blue moon. Such a rare occurrence landing on a special holiday, surely it must mean something? Cathy and I stopped for some coffee and then waited outside the 40 Watt, talking about the year and all our hopes for the future. Vanessa and Damon walked by and not too long after, I found myself behind the merch table selling Supercluster vinyl and cds.

That high platform is one of the best places to see a show inside the Watt. You can look out over the crowd (which I was constantly doing) and the band is always in your line of sight. No jumping up and down needed. I also took the opportunity to make little structures out of the cds. I managed to get the Supercluster discs into a two story sort of pyramid thing before a certain someone bought a few as presents. I can’t complain though, he was our best customer all night.

Supercluster was onstage to ring in the new year. Bob Hay took over lead vocals for Auld Lang Syne, which we all dutifully half-mumbled as we pulled the little streamer poppers Barrie Buck had given us. A small flash and a loud “POP”, usually followed by a few little streamers. The doorguys saw this as an opportunity to shoot stuff at one poor security guy. He took it in stride.

We were just so glad to see the end of ’09. What a wave of relief. New year! Everything’s different now! Right?! Surely!? I guess in the back of our minds we really know that some of the same problems will plague us again but there’s a time to dwell on that. Now is not it.

Atlas Sound took the stage but Supercluster took the floor. The crowd had been mostly static, numbly standing in front of the bands and staring. If Jason had his way, they’d be dancing. So what does he do? Take some streamers from the ceiling and begin to ribbon dance with his bandmates and any who’d join him.

It was freedom. Joy. Smiles and sparkling eyes from the very ones who had suffered far too much the past year. All of them dancing in a little circle, twirling stolen streamers above their heads, filling the air with white and blue stripes. I watched from behind the counter as Jason leaped up to our platform, twirled around, and then jumped back down to the ground with a scissor kick that Jet Lee would’ve been proud of.

It got to be two in the morning and the patrons were shuffled out the door, half-dazed and happy. Cathy and I broke down the shop and headed backstage. While she chatted with Vanessa, I took a look around the dressing rooms at all the names scrawled onto the back walls. Wait, what’s this? HA! I have my AMJ stickers right here…

I left the area having completely stickered the mess out of the backstage. We were about to head home when Barrie asked Vanessa if she would mind having “Gyrate” played over the loudspeaker. Of course, Vanessa didn’t mind and so began the Pylon dance party. Parts of Supercluster and Atlas Sound joined us and the 40 Watt staff for an incredible dance-a-thon.

And that’s the image that’s burned into my mind from the first few hours of a new decade: silhouettes dancing like there’s no tomorrow to a band from yesterday. I really couldn’t have started 2010 in a better way. Here’s to the new year and all the new Athens adventures that follow.