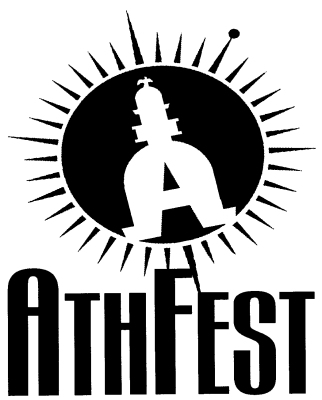 Oh wow. I can’t believe it’s time for this already but ATHFEST has announced the artists and tracks that will be on this year’s Athfest Compilation cd. While the compilations can be very hit and miss sometimes, this one looks pretty damn good to me.
For starters, I’ve heard every band on this list before. While that’s not really a qualification, it’s a bit telling. These bands are pretty popular around these parts, compared to last year’s cd which featured a lot of unknown and under the radar cuts. Apparently, the final 16 tracks were culled from over 140 submissions. The record comes out May 4th, 2010. Expect a live release party around that time as well.
1. The Whigs – “I Don’t Even Care About the One I Love”
2. Hope for Agoldensummer – “Be Free”*
3. Charlie Garrett Band – “Wasted Time”*
4. Timber – “Sad & Scrawled”*
5. Spring Tigers – “Just Suggesting”
6. The Incredible Sandwich – “Where You Are”*
7. Five Eight – “The Ballad of Frankie Jr.”
8. The Packway Handle Band – “Outskirts”
9. Modern Skirts – “ShipShape”*
10. Pride Parade – “If You See Her, Say Hello”
11. Ken Will Morton – “Tell It to the Wind”*
12. The Vinyl Strangers – “So Long, Heartache”
13. William Tonks – “Allelujah”*
14. Timi Conley – “New Boyfriend”
15. The Orkids – “Told You So”*
16. Venice Is Sinking – “Bardstown Road”*
(* marks previously unreleased material)

While reading about some of this on Flagpole, a comment caught my eye. It claimed that the cd isn’t exactly representative of what’s hot in Athens right now. And to be honest, he/she/it is right in theory. There is a lot more out there than this. But how could a single cd even begin to represent this town? Hell, I can’t even fit everything I need into a two hour long show. Don’t even get me started on the iTunes Athens playlist…

But I’m looking forward to hearing this comp. and it really just serves as another reminder of all the craziness that Athfest inspires. Really wondering who’s gonna headline this year. It’s only a few short months away.