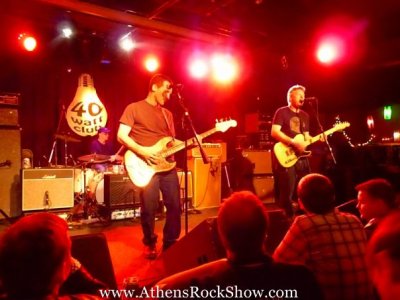 “He was the sweetest asshole I’ve ever known.”

The crowd laughed in agreement at the understatement. As I stood with my back propped up against the merch table, I couldn’t help but shake my head and smile. Vanessa’s words rang so true. Vic was a glorious bastard, our strange genius. What a life…

So in honor of this one man wrecking crew of emotion, his friends got together and sang a few songs. Some were Vic’s, some weren’t. All of them, however, were for him.

As I walked into the 40 Watt on Friday night, I ran into a wall of familiar faces, mostly musicians. They were chattering on about some random meeting with Vic that turned into an adventure, as most things involving Vic were wont to do. It seems he played with just about everyone, recorded with everyone else, and for the rest of us he was that unique creature that we’ll have to tell the grandkids about one day.

And so his friends began taking the stage, one by one, to play tribute. I was struck by the emotional level in the room. It wasn’t a joyous occasion, that’s for sure. But upon looking around, it wasn’t a sad one either. We all just looked….numb. We turned our attention to the stage, hoping to feel something.

What I remember was a beautiful blur of sound augmented by the shuffling of the crowd, the songs we knew so well sung by unfamiliar tongues. I never thought I’d be able to listen to some of these lyrics ever again, much less have them carried to me by friends. There was supposed to be a steady lineup, lists of who was on at what time and all that. After the 6th guest wandered onstage for a rousing version of a brute song, I had to set down my writing pad and just listen. I’m off work tonight.

The acts came and went quickly, courtesy of the R.E.M. backline and a quick hand from DeWitt Burton. It seemed like everyone was staying away from the more depressing tunes, the ones that dealt with the oft-covered subject of death. Understandable. This was a celebration of his life, his work, and his awesome sense of humor. In that vein, it was only appropriate that Howe Gelb verbally attacked the talking members of the audience, likening their mundane drunken chatter to second-hand smoke. His dark-eyed glare was something to behold. It was a true Vic moment if ever there was one.

Saturday night Guy took the stage with a large collection of Vic’s family and close songwriting friends. It was an incredibly touching moment watching them play songs that Vic never got to release. It was heartfelt, painful, and oh so beautiful. Just like Vic’s songs I guess. This beautiful agony….

As I was leaving the last show, a friend grabbed my shoulder and mentioned that he had just read my Chesnutt show review from November, his last in Athens. I still regret not being able to convey his last show in Athens the way it deserved. I had no idea how those last typed words would haunt me after reading them again. “I’m glad to be home, even for just a little while,” he sang. He finished that show alone onstage, plucking his little guitar in a single dim spotlight.

That was Vic. A viciously honest soul with a haunting voice, a gift for song, and a sense of humor that endeared him to all who got to know him. So we sang out our blues and laughed together and bid farewell. We’ll always have the music.