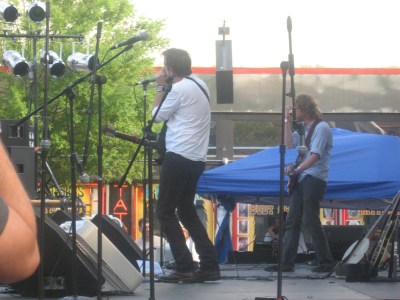 Do you ever listen to a song and think, “I wish (insert band here) would cover that”? You spend some time thinking whose voice would fit which song or who could do a really unique version of your favorite hit. With the news that people like Supercluster and John Keane are covering R.E.M. tunes, I thought I’d make a list of some song choices I’d like to see happen. Wishful thinking? Yeah, probably. But it is fun to pretend.

Casper and the Cookies – “Killer Tofu” from the cartoon Doug
I think the Cookies are just loopy and rockin’ enough to pull off one of the greatest fake band anthems ever. For extra irony, they should play this at Go Bar, located right next to the best vegetarian restaurant in town.

Modern Skirts – “Hey Jude” by the Beatles
Yeah, the Skirts are trying to get away from the soft piano based rock of their first two albums so “Hey Jude” may not be their first choice. But the visual image of Jay just going nuts during the “HEY JUDEY JUDEY JUDEY” is worth it.

Ken Will Morton – “Subterranean Homesick Blues” by Bob Dylan
Since Morton’s voice already has a small hint of Dylan to it, why not give him a Dylan song to sing? He’s got a lot more drawl than the king of songwriters but with a little bit of effort, he could pull it off.

Chris McKay and the Critical Darlings – “Rock and Roll All Nite” by Kiss
They’ve done Billy Idol and sound like the Stones anyway, so why not throw in some glam rock there Chris? Possibly some facepaint, hm?

Drive-By Truckers – “Cigs, Coffee, Booze” by The Minus 5
I can just hear Cooley’s twang here on a straight-forward cover of McCaughey’s signature tribute to life sustaining substances. ‘Course, the country feel of the original probably helps that along a lot.

Deaf Judges – “It’s The End of the World As We Know It (And I Feel Fine)” by R.E.M.
Well I certainly wasn’t gonna make the best hip-hop group in Athens do the rap from “Radio Song.” The Judges are a talented bunch and could make one hell of a remix/rap/freestyle out of the already frantic hit.

Like I said, any of these is a long shot but who would’ve thunk that Packway Handle Band would cover Madonna?