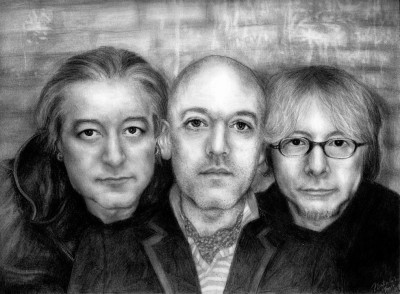 (Stunning sketch by natrenee on deviantART)

Holy cow guys, there are a LOT of albums coming out of Athens this year. Seriously, it’s gonna be hell trying to figure out the Flagpole awards next year. So hang on to your B-sides baby cause here we go.

Starting off in R.E.M. land, Michael Stipe has donated a sculpture to be auctioned off to benefit Partners in Health to rebuild Haiti. Partners in crime Peter Buck and Scott McCaughey are releasing one song a month through their band The Baseball Project (with the ever charming Steve Wynn and hilariously awesome Linda Pitmon). You can grab this month’s at ESPN. No word on Mills. Probably working on his backswing before the Master’s tourney kicks off. Back to watching their Austin City Limits gig, I guess.

Speaking of Masters, the boys in Widespread Panic have finished up their newest album at John Keane‘s place. Dirty Side Down will hit May 25th, featuring a song by Vic Chesnutt entitled “This Cruel Thing.” John Bell chats about it here and Keane talks about it here. Featuring artwork from Marq Spusta. Additional mixing of the album provided by teh mixing kitteh. Photo by JB.

Athensmusic.net is holding a dual record release party for The Whigs and the Drive-By Truckers. The Whigs album is called In the Dark while the Truckers have moved from New West with The Big To Do. Party’s on MONDAY, March 15th at Little Kings. Doors are at 8, music from the records starts at 9 and there will be a raffle. The Truckers will appear on Letterman TONIGHT and Jimmy Fallon’s show on March 31st. Oh. And they’re on tour with Tom Petty. And here’s Drowned In Sound’s take.

The Modern Skirts are playing the Caledonia Lounge? Apparently so. Wonder when that new completed album of theirs will show up…

Venice is Sinking, however, is going full force with their release, Sand and Lines. The new album comes out on June 15th, the same day as when the Georgia Theatre burned down last year. Makes sense since it was recorded live there. The band talked to Spinner about it recently. There’s some pretty epic promo shots done by local photographer….

Mike White who also scored the cover of Harvey Milk‘s new album A Small Turn of Human Kindness. That drops May 18th. They also got some great comments from the NYTimes.

Of Montreal got their kiddie on by appearing on Yo Gabba Gabba! They’re also getting a tour documentary. Craziness abounds.

And MAJOR props to the 40 Watt for naming their SXSW stages Jerry Fuchs, Vic Chesnutt, and Jon Guthrie.

And in AthensMusicJunkie news, we updated the site a bit. Hope you like it. We’re always looking for suggestions so hit us up at athensmusicjunkie@gmail.com.

UPDATE: It has been pointed out to me by the gals at the Mike Mills Tribute site that the REM bassist has been involved with The Voice Project,  which focuses on the plight of women in war torn Northern Uganda. He recorded Billy Bragg’s “Sing Their Souls Back Home” at his place in LA.

Mike Mills » Billy Bragg from The Voice Project on Vimeo.