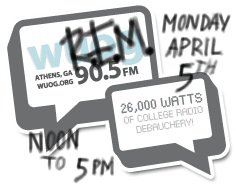 WUOG 90.5 fm, the student run station at the University of Georgia in Athens, GA will celebrate R.E.M.’s 30th anniversary by breaking our long-standing station philosophy and playing R.E.M. songs for 5 STRAIGHT HOURS on Monday, April 5th, 2010, from noon until 5 p.m. EST.

Typically, bands that have achieved mass popularity like R.E.M. are not played on the station’s airwaves. But we consider R.E.M. one of our own so we’re throwing a party, complete with cupcakes! Myself (Jordan) and Local Music Director William Kennedy (of local band Reptar) will be djaying through 30 years of albums, b-sides, covers, bootlegs and who knows what else! There may even be a surprise or two…

R.E.M. has had a long history with WUOG. Kathleen O’Brien, aka KO, was djaying there when she asked the boys of R.E.M. to play her now legendary birthday party. The station played a great deal of their earliest recordings and was housed in Memorial Hall where the band played one of their first shows. And when the station moved to its current location in Tate in December 2008, bassist Mike Mills was the last dj on WUOG at Memorial.