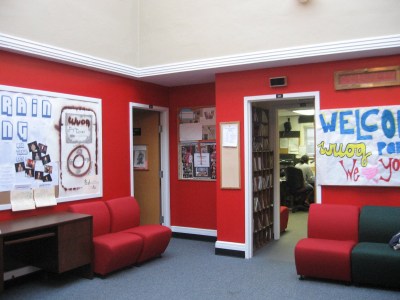 The old place in Memorial…

So this is it. The last time I’m ever going to click on the mic, read some nearly impossible to pronounce PSA from our crack PR team, and watch that “On Air” light slowly fade to black. Ok, maybe I’ll be back for alumni events and whatnot but tonight, I’m saying goodbye to my show, “Sound of the City.”

It’s been my little window of sanity for three years running but as I’m about to graduate from UGA, I’m graduating from WUOG as well. I first started hosting the show when my Local Music Director, Ethan, began taking really complicated language classes and needed someone to take over the show. From then on out, I’ve been on air nearly every available Tuesday night during the school year. I’ve heard some of the best and worst Athens has to offer in our lobby. I’ve moved house from a 37 year stronghold to the new radio home. I’ve been through three local directors, two mixing boards, and more worn records than I can count.

God, it’s been so much fun. How often do you get to do something so up your alley? Just sitting there for two hours, chatting with my friends and listeners, and picking out a (hopefully) varied playlist of Athens and Atlanta artists. Half of the great musical discoveries I’ve made have been in those dusty archives. And thank you, mysterious intern, for putting all the records in protective sleeves.

I remember my first on-air guest: Sonia Leigh. It was a special arrangement done on the fly in order to promote an upcoming show of hers. We went back and forth on questions in between music breaks. The entire section only lasted about 30 minutes but it was grand.

Then Randall Bramblett. Talk about a great “get.” My second ever guest dj just happened to be a music legend, though not nearly as widely recognized as he should be. He played an incredible Live in the Lobby acoustic set and then sat with me for the next hour and taught me, and all the SotC listeners, more about jazz and blues than I’d ever known. The talk was breezy and I got to know about his background while we were switching out records. To this day, I still greet him as Mr. DJ.
My third ever guest on the show? Mike Mills. Looking back on it now, it’s absolutely ridiculous that I go from rising star, to established jazz legend, to mega-rockstar. And boy was Mills the rockstar. I still can’t listen to the recording without laughing. So much fun. Never in a million years did I think something like that would happen.

And all of the fantastic guests since, far too numerous to name here but incredible nonetheless. We laughed like fools and had difficulties working the record player. I might’ve threatened to strangle a few of you once or twice. All’s fair in love and radio, right?

All my love to anyone who listened in over the years. Talking to you on the phone or on that weird chatbox was always a thrill. It’s good knowing that you’re not just blathering to the ether.

And many, many, many thanks to all the WUOG crew. You execs who basically let me run rampant, the top-notch tech team who taught me how to mix and mic, and the nutty local music fans who actually knew who Pylon was when it counted. You were among my first friends in Athens. Thanks, and remember to always claim your favorite magical creature.

So what will I play this last show? You’ll have to tune in tonight at 8 to find out. Not a whole lot of sappy, sentimental stuff (unlike this post, right?) But expect a lot of familiar names and sounds. It’s been one hell of a ride at WUOG and I’m going out turntables blazing.