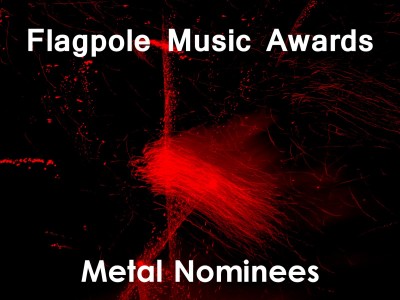 (Graphic/Ziona Kocher)
You can’t handle this nasty mess of awesome that is the Metal category of the Flagpole Awards. From the drone to the noise to the hardcore and beyond, Athens has metal down pretty well if you ask me. Pick your favorite method of hearing loss and vote before May 28th!
HELMSMEN
The band formally known as Peachs in case you were wondering. They claim Sabbath as a major influence and I’m highly inclined to agree from what I’ve heard.
HOT BREATH
They have a song called “Mauled by a Bear” that honestly sounds like the band is being mauled to death by a bear. Hard, loud, and a lot more uptempo than you would expect.
MAXIMUM BUSY MUSCLE
Metal with a melody, MBM specializes in the start-stop-start uptempo and lighter side of metal. This trio likes to get tunes stuck in your head at an ear splitting volume.
SAVAGIST
Lots of hair makes for good head-banging, right? Well, these death metal heads certainly put on a show, screaming and yelling their lungs out in the ways that hurt so good.
UTAH
Ok, any metal band that lists Gonzo Journalism as an influence is ok by my book. Utah sounds like a bunch of machine guns aiming directly at your head. Terrifying and awesome.