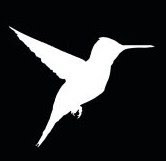 As I drove through Athens on Friday, I felt a chill run down my spine. Here I was in the place I had long considered home and I was just visiting for the night. The walk to Flagpole was made rather hellish by the hot and humid atmosphere, causing me to wonder just how badly I wanted those paychecks. Remembering my unemployment, I carried on, humming some Misfortune to myself in anticipation of the night’s events.
After that quick trip and a journey out to grab Misfortune’s guitarist Pascal, we finally got into the practice room where a flurry of activity was already underway. Singer Chisolm and drummer Lemuel had begun moving the instruments, gathering paperwork, and packing everything up for the trip. Lunch, sadly, remained sitting on the countertop, uneaten and taunting me.
When the trailer was finally packed, we realized that we had no room left for the Misfortune merch sign. The beautiful piece had a giant hummingbird on it, Misfortune’s mark, and is incredibly eye-catching from a distance. Basically, it had to come with us. Looking at my small car, we felt a sense of sadness, wondering how in the world we could fit it in. Two minutes later, I was ripping the backseat out and we had managed to wedge the sucker into place. Success!

We managed to get everything to the 40 Watt and began setting up the incredible amount of stuff. I handled the merch table stuff: t-shirts (black, white, grey), buttons, cds, stickers, kick-ass tablecloth… Misfortune has a lighting rig that they use with most of their shows. The set up time on it varies from a few minutes to the better part of an hour, depending on the amount of lights and the venue. Care and feeding of this rig belongs to Pascal who had to set up the entire thing in between soundchecks. We had brought lunch with us but alas, it once more stood on the counter and stared into the dark abyss. Damn you, sandwich.

Everything was in place and everyone was sweating down something fierce. We all went back to our places and got dressed for the show. Tonight was a weird night wardrobe wise. The band had just done a photo shoot earlier this month with Michael Lachowski and they wore all white, a rarity for Misfortune. They figured why not do it again for the show? The thing that remained the same was that spiked hair. I have yet to enquire how much the band spends on hair products and eyeliner but I have a feeling I don’t want to know…Lunch was finally eaten and enjoyed.

The ticket was one of the stranger ones I’ve seen. Leaving Araby did their pop-rock act, impressing me with the amount of people they drew in. Yo Soybean was next, bringing a giant sunshine up with them onstage. I laughed when I saw it. After that sunny and happy set, the dark tunes and bright lights of Misfortune would look like a thunderstorm after a bright day.

(Picture from another Misfortune show)
I know I’m biased but every time they kick off the set, Misfortune 500 blows my mind. It’s probably the lights. I’m a sucker for anything shiny. They’re often blinding. Maybe we should start selling M500 sunglasses… Anyway, the band ended their set with my personal favorite cover “Dancing in the Dark.” Chisolm sounds a bit like Bono vocally and I adore the arrangement they made. You can listen to it here.
Chills. We sold a few of the combos (t-shirt/cd/button/sticker) as Radiolucent came on. It was a little jarring to hear something like “I’m So Country (It Hurts)” after the previous set but I think they did well. Since we were heading to Columbus right after the show and I was driving, I took the opportunity to take a little nap. Driving three hours in the middle of the night? Bring on the Mountain Dew and crank up the iPod. It’s gonna be a long drive.
Tune in Thursday for the long trip to Summer Side Show, a guest appearance from the Modern Skirts, and more on the next episode of “Tales of Misfortune.”