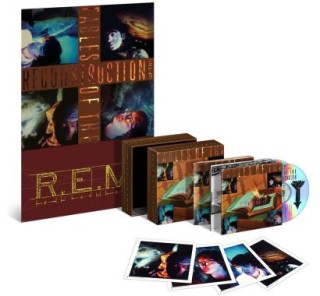 I can’t tear my eyes away from the spinning, spastic, nearly painful to watch blonde whirly-gig that is Michael Stipe. Part-Elvis, part epileptic, the singer is facing away from the German audience more than he looks directly at them. Buck is on his knees, knocking on his guitar while Mills and Berry look on. This is R.E.M. at Rockpalast. And I’m watching it about 25 years too late.

With the re-release of Fables of the Reconstruction, I’ve found myself digging into R.E.M.’s back catalogue (always a welcome chore) to find the songs that I can dub “Southern.” From time to time, I run into friends who totally forgot where R.E.M. came from, and I can’t really blame them. The band’s most recent material, coupled with their smash hit songs don’t exactly harken back to the land of sweet tea and sticky summers. But Fables is Southern from head to toe. And yet, it took recording in London before R.E.M.’s roots really started showing.

It’s difficult to explain to a Northerner what it’s like to grow up in the South. And to try and explain the rural/urban duality of Athens is to talk onself into a circle. All the modern amenities you could want, but check the Huddle House sign and it proudly proclaims they have “ice cold air conditioning.” It’s not easily understood. Fables captures some of that nature: trains, heat, darkness, nature, progress, storytelling.

Take the trains that dot the album, for example. Though they have fallen further out of use since 1985, trains still can be found all throughout Athens, blowing their whistles in the distance late at night. Some find it annoying, but for many, it’s a comfort. The trains are still running, time is still moving, and we are all still here.

The tales of “Wendell Gee” and our protagonist in “Life and How to Live It” are the types of stories you hear that could be true, but you’re never quite sure. More than likely, you know of someone that could fit those characters, but there’s just a touch of oddness that takes the story into the gray area between truth and fable. As long as it teaches and entertains, does it really matter?

“Can’t Get There From Here” is a personal favorite, due to the fact that it is very difficult to get to Athens from my hometown, both physically and psychologically. And some 25 years ago, it was difficult to imagine a band from Athens could get anywhere in the world. Now the chorus “I’ve been there, I know the way” can be sung without a hint of irony. R.E.M. has been there, they know the way. It took a lot of trial and error. And I guess you really can get there (wherever that is) from here.

R.E.M. may not be a Southern band the way that Skynyrd was, but the band’s connection to Athens, and by extension, the South, cannot be overlooked. Everybody here comes from somewhere, right?