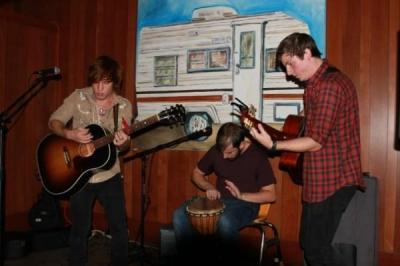 Who can take a rainbow and make it a double rainbow of awesome? Why, Yo Soybean! They call themselves a party-folk band and I have to agree. I was first introduced to this happy group at a very mixed show at the 40 Watt. They had a cutout of a sun onstage. Unusual for the Watt but very fitting for this band.

Soybean impressed me with their pop/folk leanings and upbeat songs. It’s hard to be upbeat in this down without straying into twee/bubblegum territory but Yo Soybean dances merrily around stereotypes. Heck, they’re likely to invite you to join as well.

That’s not to say that the ‘Bean doesn’t cover some more serious topics. They just do so in a way that is very refreshing and without self-involved ego. Expect a lot of traditional folk instruments like banjos and harmonicas but with the occasional bongo. So if you’re in the mood for some hummable tunes and general happiness, catch Yo Soybean TONIGHT at the Caledonia.