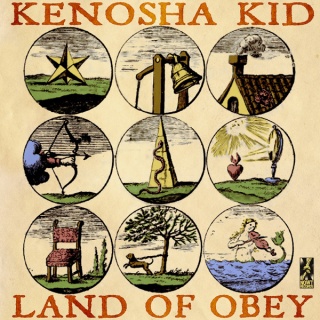 Early in 2010, something magical was happening at the Flicker Theatre in downtown Athens, GA. Even if you caught one of those subtly electrifying Monday night shows, you were probably unaware that your enthusiasm might become a part of Kenosha Kid’s live work entitled Land of Obey out on Nowt Records.

The album’s cover should give the listener a hint. Nine little portholes give a glimpse into Land of Obey, with its mythical soundscapes punctuated by effortlessly fiery guitar from budding master Dan Nettles, silky and profound bass underpinnings from the ever-steady Neal Fountain, and artful staccato striding from technically-astute drummer Marlon Patton.

After years of stage time, these three players are so well-versed in one another’s vocabulary that each part is complimentary at heart – generosity is the norm, egos non-existent. On the album’s highlight, ‘Muddy Waters’, guitarist Dan Nettles deftly fools with a dark, bluesy entrance that evolves into something far more vast, innovative and intriguing beyond its humble Delta beginnings.

Later on, ‘Take What You Want’ shows some of Kenosha Kid’s famous versatility, lilting along with a slight alt. country / rock twinge albeit with a tight grip on the inherent swinging soul that keeps much of the set tenuously rooted in modern jazz foundations.

All genre tags aside, Land of Obey is a brilliant work borne of inventive melodies and inspiring arrangements, all left to simmer and meld within the recording’s live space. Eclectic folk / jazz artist Dan Hicks famously wrote, “Favorites on the jukebox are only half the show…” in a lyrical reference to the shortcomings of “canned music”. In an era of Autotune and heavy-handed studio trickery, one of the South’s most talented improvisational / instrumental bands, Kenosha Kid, has circumvented this pitfall, and listen y’all, the results are breathtakingly alive!

Alex Tank is a contributing writer for AMJ and creator of res ipsa loquitor. You can find an extended version of his review at his site.