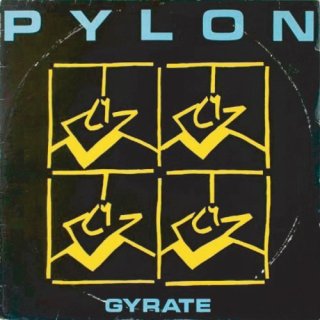 After couch/apartment surfing for 8 months, I’ve finally found a place to live for good. Naturally, with any new place comes the workload of cleaning and decorating and general mayhem. As I type now, I can see all the lovely splatters of paint still on my hands from yesterday (blue and white if you must know). The process of moving can be exhausting, exciting, and extremely rewarding but what to do about the soundtrack?

While doing some preliminary cleaning (dog fur in the bathtub, ew) and washing (yay walls?), my other half and I decided to crank up some tunes to keep us entertained while chasing dustbunnies around. What to play…what to play…. I put on the laptop and we listened to the new R.E.M. song (Uberlin! Wow!) but after I had hit “play” for the 17th time, Other Half suggested maybe we should listen to something else.

Naturally, I break out the Pylon. All of it. Chain, Chomp, and Gyrate were all in place and were thusly picked apart, analyzed, and talked about over the course of the evening. Ever notice how mean “K” sounds? Then a few tracks later you have the poppy “Crazy.” Man, the stuff Randy did with that guitar. And those basslines. And the drums. And the vocals….. There’s reasons why I keep coming back to this band.


Other Half is a fan of Chomp moreso than Gyrate, my fave, but the musical evolution of a band that wasn’t really that intent on being a “band” at times is incredible. So, um, yeah. Summary of this post: YAY PYLON and also Yay House!