I have been looking forward to this night since R.E.M. announced Collapse Into Now‘s release date. Every single video snippet, song lyric, and trivial piece of information had been gathered. Finally, it was time for my favorite kind of party. This time I was joined by my plus one and  my friend Rebecca who came all the way from Pennsylvania for this R.E.M. overload of a week. We met my plus one at a local pizza spot and walked to the Watt, unsure of exactly what the night had in store. Usually these listening parties are held in smaller, more intimate spaces. When there are bands involved, then you book the 40 Watt. But when we walked into the building, it quickly became clear that only this venue would have worked tonight. The projector was already running thank you credits and was prepared for the dvd that Mr. O’Neil had just completed earlier that day.

The crowd had already gathered around the silent auction tables, taking stock of just what was available. The rest of us “Excuse me” and “Pardon me”d through the crowd toward any spot that looked large enough to allow us to stand around comfortably.

We listened to Collapse Into Now fully, hearing it mingled with the murmuring of the crowd. It was interesting to hear how the crowd got a bit louder during the songs that had already been released to the public. Those five got a lot less attention but when “Blue” came on, the Watt was the quietest it had been all night. The three of us sat, quietly listening, in the corner. With every song came a thought, a memory, an idea. But that’s another blogpost…. 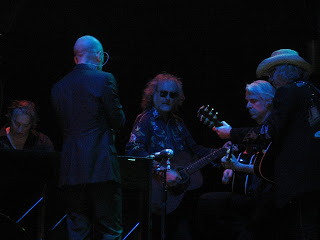 Raffles are both amazing and frustrating to me. Since I lack proper fundage to purchase additional tickets, I always have to just hope and pray I get something. We ended up getting one of the 5 song samplers which was pretty cool. There was a lot of other neat stuff from t-shirts to cds being given away. And the honey. My gosh the honey. I should probably explain that.

You see, there’s this song called “Mine Smell Like Honey.” Besides the slightly disturbing connotations that title gives, it also presents a unique marketing opportunity. Much like the fabled “Gardening at Night” gloves, the “Mine Smell Like Honey” bears are collectible. They’re bear-shaped honey-filled bottles. With a “MSLH” label. Cute. They were up in the silent auction along with signed records, shirts, posters, other bands’ stuff, etc. It was all pretty neat. And out of my price range for sure. After a quick look over, we managed to secure a seat in the back of the Watt.

Michael Stipe was gracious enough to send all of us a video message from Berlin in which he also wished Amy a happy birthday. Naturally, birthdays require cake. So a massive, sugar-coma inducing, Collapse Into Now themed chocolate cake was produced for Amy and Dewitt. We were encouraged to partake in said sugary explosion but not before a joyous round of “Happy Birthday” (still under copyright, believe it or not)to the birthday boy and girl.

Next came the intense live auction. Even Stipe’s family got in on the bidding. Mr. Montgomery once again played auctioneer, coaxing the audience to participate in bidding. As always, it started slow but once things heated up, a lot of money ended up donated. Here’s a rough rundown:

And I have no clue what the silent auction items went for. All I know is that for the fifth time in a row, I’ve been outbid on my beloved R.E.M. tea tray. At least we managed to walk away with a raffle item. We laughed off what we couldn’t buy with a rousing rendition of “If I Had Money, Uh, If I Had Money, Uh”. We were rather pleased with ourselves for that. Paul Butchart came over, bearing gifts and gab. Soon all of us at the Watt were watching the interview reel from CIN, followed by the two new videos. It was during this time that Vanessa and Damon dive-bombed us with delicious cake. Seriously, it was good but god help me if I ever have that much sugar in one go ever again.

The crowd began to disperse as the night went on, leaving only a few of us to vie for the last few raffle items and listen once more to the album. The wonderful reps for Whatever It Takes and Community Connection filled us in on their duties. Look them up if you’re so inclined. The work they do is admirable. We said goodbye to our few remaining friends and left the Watt. As we waited on the corner for our ride back home, you could hear the last strains of “Every Day is Yours to Win” floating out of the building…

“Every day is new again, every day is yours to win. That’s how heroes are made.”

And with that, we ended our night. Such a wonderful evening and we all hope there will be more to come.