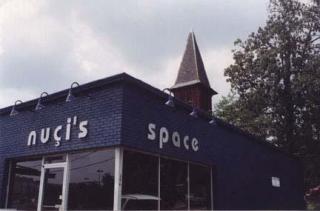 Once again we find ourselves at the end of January. Naturally, that means it’s time for every mailman, fry cook, copy dude and lawyer to strap on a guitar, find that weird guy from Accounting that plays drums and rock out for Nuci’s Space.

I love the whole idea behind Athens Business Rocks. We live in a town where literally everyone is a musician, some of us just aren’t the traditional band-forming type. So why not let the masses perform at the 40 Watt with their buddies? It’s probably one of the more interesting team building exercises a company can do.

This year’s band names don’t quite thrill me as much as some from last year but at least you know where the groups come from this go round. Flagpole is once again changing up their act and paying tribute to their mag’s 25th year by going as ’87 is a Place on Earth (though you could argue that “place on earth” is located around the Pulaski/Barber area). The band is playing tunes from 1987.

My personal favorite name this year is Notary Public Enemy from Christopher Blanchard’s law office. Second place for name p’wnage is Turnip the Beets from Heirloom Cafe. 80# Cougar (Bel-Jean) is still my favorite to win the whole shebang this year.

Make sure you get yourself to the 40 Watt tonight before 8:30 p.m. Toss a few dollars toward your favorite bands and help raise some dough for Nuci’s Space. See ya there.